In th press
Biker at the Lyceum

Biker at the Lyceum 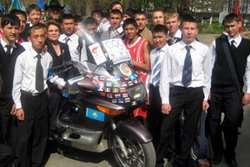 On Friday, March 11, known Kazakhstan biker-world wider Dmitry Petrukhin has met pupils of Professional Lyceum №6. Taking advantage of the fact that the country’s leadership invited him to take part in the Olympic torch relay, dedicated to the Olympic games “Beijing–2008”, he interrupted his next trip around the world and arrived in Almaty. After the relay Dmitry Ivanovich was invited to a meeting with pupils of Lyceum that he told them about the travel.

According to the Director of professional Lyceum №6 Tamara mukhtarkhanovna Shakirova, this educational institution is special: only boys are trained in it! And guys, as you know, the most ardent fans of auto and motorcycles and everything connected with them. The fact is that the boys in this unusual Lyceum learn how to repair automotive equipment, master other technical specialties, thereby filling the acute shortage of professional staff. In addition, the majority of Lyceum pupils are children from disadvantaged districts of Almaty, where the percentage of crime and drug addiction is much higher than in the city center. And children who regularly see drug addicts and criminals on the outskirts of the metropolis, and often become their victims, are at risk. Therefore, the purpose of the invitation of the world-famous biker in the Lyceum, for the most part, educational. So the audience, before which the biker spoke, was about a thousand people.

By the way, Dmitry Ivanovich himself in the past graduated from this school. Then, after graduating from College, worked for a long time as a simple miner in the mines of Karaganda region. And in the first years of independence Kazakhstan began to engage in business at its own risk. As the Director of the Lyceum said, such people should become the standard by which today’s youth should be equal. This is not a very safe area of the city in terms of crime. And it is important to interest teenagers, show them that you can change your life. Not to sit in the doorway with a cigarette in his teeth, and actively engage in sports, good to learn to grow up worthy citizens of Kazakhstan. Love the technique – it is a worthy replacement drug, because adrenaline, which is released from the bike ride, mood is not worse than a drug!

Moreover, Dmitry Petrukhin had something to tell students. He showed the children his legendary motorcycle, which alone drove around the globe for the first time, and next to which were photographed almost all the students of the school. I told teenagers about what difficulties he had to face, in what unusual situations got and as he from them with advantage left. It is known that today the biker traveled 61 countries of the world. On them he brought a flag of Kazakhstan. For the most part, as Dmitry Ivanovich himself says, he realized his childhood dream – to travel around the globe. He also set a goal to improve the international image of Kazakhstan, so that we do not stand in line with the disadvantaged countries, whose names also end in “camp” – Afghanistan, Pakistan, Turkmenistan and so on. In almost all parts of the world he showed our young developing country, the culture, the traditions, the multinational people.

Dmitry Ivanovich told teenagers about the peculiarities of traffic in other countries, about interesting cases and people. He showed video reports about his journey and answered the questions of the guys. He also noted that in all megacities and in Hong Kong, and in Shanghai, and in Washington, and in Sydney, people increasingly prefer not to travel by car because of traffic jams. They’re moving to motorcycles. Almaty also young people to acquire a scooter or other scooters. Why? Yes, because they do not require rights to manage. But this does not mean that the streets of the city they can behave ugly. Biker reminded the Teens that don’t follow traffic rules, they endanger themselves and others, so riders just have to be careful. All the more, such young.