Кругосветка 2006
In the twin city of Pataya

Came to Pattaya early in the evening. Came to the appointed meeting place where, as I said on the phone, going to meet Kay. After a short wait, a car drove up to me, two Thais and a white girl came out from there – she turned out to be Kay (that is, Katya, an interpreter from Ukraine), who works with tourists from the CIS. In General, I got a hotel near the beach. Immediately, without departing from the topics, outlined the plan for the next two days. Firstly, acquaintance with the city and its surroundings and meeting with representatives of sister cities…

I must say that the sister city of Pattaya is Chimkent, not Almaty. But nothing terrible: let there be Chimkent, and in General I think that I represent not only Almaty, but also all Kazakhstan citizens. When I return to Kazakhstan, I will contact The Chimkent Committee of twin cities and give them the message of the Thai brothers from pataya.

This is my fourth mission-to meet, speak and participate in such committees, and everywhere in different ways. But visible to the naked eye that this is done not for show, and with a special warmth. I looked at a lot of materials about such meetings – photos, articles… Always on my return home I open websites of sister cities on the Internet-and everywhere I find information about my participation in committees. I still have friendly relations with the committees of France, the USA, Russia and Poland.

Did a lap of honor around the evening city. Nice but rainy. Here is a small world! – the very next day in Pattaya I met a family that together with me flew to Bangkok. According to Kazakh customs, it would be good to note this meeting, but for the entire time of my tour – dry law!

During the meeting on the Committee, I learned that many of our Kazakh children study in Pattaya – not only Thai and English, but also in colleges and universities. I wished all those present fruitful work and good study to our students. According to the tradition handed our flag, the whip and the magazine about Kazakhstan.

The next day came the good news from Bangkok: our athletes began to win medals in Thai Boxing. The Adamov Samat – gold, Diamond Zakayev – bronze, but Almaz Kasenov and Theodor Sariev mined for silver. Super! Guys – and many of them are familiar with my sons-throw off me on mobile messages.

Called from the Embassy in Bangkok, said that you need to wait another day to get a visa to Vietnam. Well for me one day if I for three months in Moscow the Vietnamese Embassy did not give a visa!

I spent the day with a Thai man named Vancy. In Russian, he knows nothing but” Hello”, just like I do in Thai and English. But with the translator we clearly understood each other. Let’s go to his house. He has two older brothers engaged in therapeutic massage. I, of course, the first thing they asked him to give me a massage to complete the program. Interestingly, they say that it is not necessary to completely bare the body for massage. Within two minutes I wanted to sleep. I, in fact, the house also periodically doing massage from her masseur after Chimbulak or after “pokatushek”. But it is heaven and earth! Our massage is combat and alive, and they did me something unearthly, air. Rather, I got calm than physical relaxation. Of course, some things I caught and I think the house will work out on its own. Then we went to their market together.

I say to them, serve, they say, the exotic and extreme. Ah, eat survivors oysters for me not be the first time, and here is fried cockroach and frog!.. I must say that the frogs I ate already two pieces (they are crunchy, and taste of Thai sauce and seasoning gives the possibility to eat it all without causing the reverse process), whereas the cockroach to try and did not work – because of his appearance. And, actually, not so extreme – to eat something fried, here a live caterpillar or a super bug… but here it isn’t present. Here I am in Laos or in Vietnam, there is the more exotic. Yes, I always miss bread during the meal (replaces rice). I have been here many times eating meals such as our beshbarmak, but instead of meat, shrimp and lots of greenery. In this case, and bread is not necessary, there and so is the dough.

Tonight my program: mandatory meeting with Thai transvestites. I have this not the first meeting with them (4 years ago I rested in Thailand), but until now not can understand, that this: theater, art expression, perversion of or something still. But – the beauty is indescribable! And if not for their male dialect, distinguished from women, it would be almost impossible.

And the people here are good, I’d say that’s pretty cute (especially girls). The only growth they have is not important.

No matter how broke we are caretakers for the crocodiles to get my head in a crocodile’s mouth, they did not go for it even for money. Only-allowed me to sit on the crocodile on top. But still ahead of such countries as Thailand, I will be on the way at least four or five.

Quite forgot: before crocodiles I met with its namesake Dima. He-zmeelov, lives in Thailand for 10 years and constantly catches different snakes and lizards. That’s fantastic! When I took the poison from Cobra and then put it on my shoulders (terribly!). By the way, he is also a biker, but when I saw my bike, just stunned. Like, how do you cope with such a mass of 500 kg… We exchanged business cards, we will communicate on the Internet. Yes, wanted to provide me with a living snake, but I refused (where am I its den?), then he gave me a booby-trap. 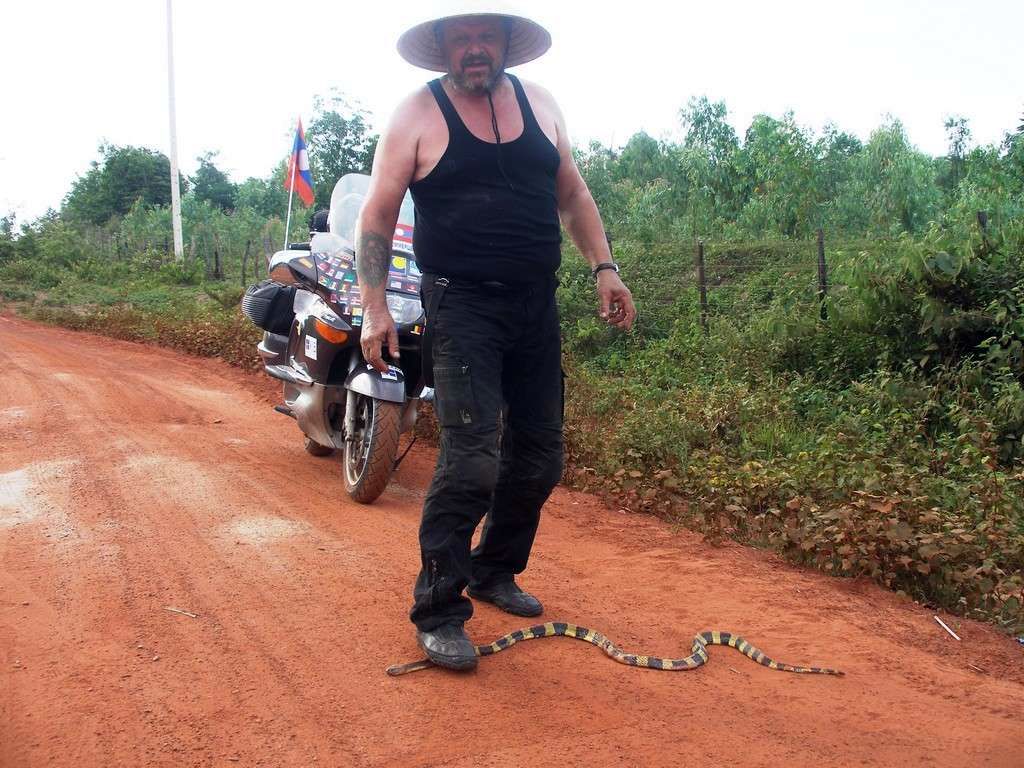