Кругосветка 2006
Irkutsk is an ancient city

Irkutsk is an ancient city

In front of the Irkutsk, I have come in a settlement. On the road ordered two sticks of barbecue. Shashlik has told for 20 minutes wait while to be made. Well, and circle of women, one after another serves fish from the lake, fried, and smoked. Decided to try it. Honestly, I would say in one fell swoop ate 4 pieces – vkusnotischa this fish is omul! The skewers didn’t even try.

I want to talk about the road between Slyudyanka and Irkutsk. Not highways, and “space”! Copy of the road in Vietnam. Then the mountain, then the mountain, then a sharp turn and all this for 100 km. Tired like travelled 1000 km. we Stopped in Irkutsk. Phoned the local bikers. We agreed that I’ll reach there we shall meet. Wanted to be arranged in a hotel, but it was not there. Prices space-from $ 100 and above. The horror! Two hours of search of lodging for the night were not crowned with success. Went on a meeting with bikers, can they will help find acceptable option.

Met me cool. Was the motorcycle 20, for me, this scene reminded our Almaty 2000, when we had been controlled the traffic police authorities. A little bit, just to shtrafstoyanku. Roughly the same. Chase square, bully bikes on the back wheel and grind the asphalt, the patience of the traffic cops and they ran out on 4 machines dispersed motorcyclists. Some guys recognized me from Newspapers and the Internet. They have in mind does not fit, you can go to one worldwide. They are farther of Novosibirsk were nowhere. Go to the Cafe. Tortured me with questions, I’m tired and want to sleep. On the phone they found me a room for $ 30, though without water and without light. But bike under guard. Paid immediately for two nights, because tomorrow heap Affairs, and in Krasnoyarsk’m going to go day after tomorrow on the morning. Decided to sleep, although in principle I am evening part prepare for tomorrow’s trip.

In the morning I called on a hundred journalists of the Central TV RTR, agreed on 12 hours. Also called with relatives of my friend Valery Lvovich. It was a very pleasant meeting. Wanted me to leave for a couple of days, so I gathered strength and went on. Now I understand, that only in road and in movement, I have emerge forces. After interview (I gave at once to three TV channels and Newspapers) I was asked to pass on day Irkutsk to make video on the move. Thanks to journalists, they in the evening I took off the whole Assembly and brought to the hotel.

Irkutsk is an ancient city. Old buildings are combined with high-rise buildings. The people interesting, what drivers, what pedestrians get – say, where? And when I answer in Russian that I am from Kazakhstan, so “go crazy” – yet won’t let go. Mostly they see foreign bikers, which drive on a highway Europe-Vladivostok.

On the evening again was hanging out with local bikers. It still shows that they are not strongly left forward bykovskoe culture. Maybe they’re just being mean to the authorities. But the boys are great! Morning came Stephen, Herman and Vick (too biker) to escort me out of town. Say goodbye. I think today to reach to Nizhneudinsk, and to Kansk.

Angarsk has passed by, did not even bother to call. Very beautiful place between Usole Siberian and Cheremkhovo. And then there is a continuous construction of the century. Expand and repair roads. I think such rates in couple of years will stop.

Interesting meeting was on a highway in one village. Me on the road for a long time did not come across a cafe and I decided to stop in a village and there I went into their local cafe and sat down to eat. I was approached by a man of 75-80 years. Interviewed. I realized I was doing a motorcycle trip. Said the good fellow, safely. And told me that during the war he drove a trophy BMW motorcycle for a year. From 1943 to 1944. In 1944 he was captured in the Caucasus and sent to Auschwitz camp. Sat there until the end of war. After our he was released, he remained alive, because many were shot as traitors. He was immediately put in a special train and sent to Siberia for 10 years.. Now still drives a motorcycle, however IZH with a cradle. Left him some of his photos. Strangely, a lot of years and relatives practically are not present. But, in fact, we haven’t really talked, because local peasants, who are already under the gas began to ride my bike. I once again concluded that people tease is not worth it and therefore tried to not stop in towns.

Still, I got to Kansk, Krasnoyarsk hand is 200 miles away, but better leave it for tomorrow.

At the entrance to the city stopped at a Motel. It is located directly on the banks of the river Kan (tributary of the Yenisei). Contrast crazy in the afternoon from heat, at night under zero degrees. So without undressing and went to sleep. In an hour me have settled two truckers who are up to 2 a.m., “took a chest”. Barely get rid of them – I think that if biker, beer and vodka attribute. And, for almost 5 months, I almost got rid of alcohol.

I called my sister Rimma, who lives near Krasnoyarsk. Asked her what city to be the place where he died during the accident my Grand daughter Kate and daughter-in-law of Light. Tomorrow I will be there.

I regularly call my friends and family, they say that I have long exhausted the limit of his motorcycle and waiting for me at home.

So, Darkhan is behind 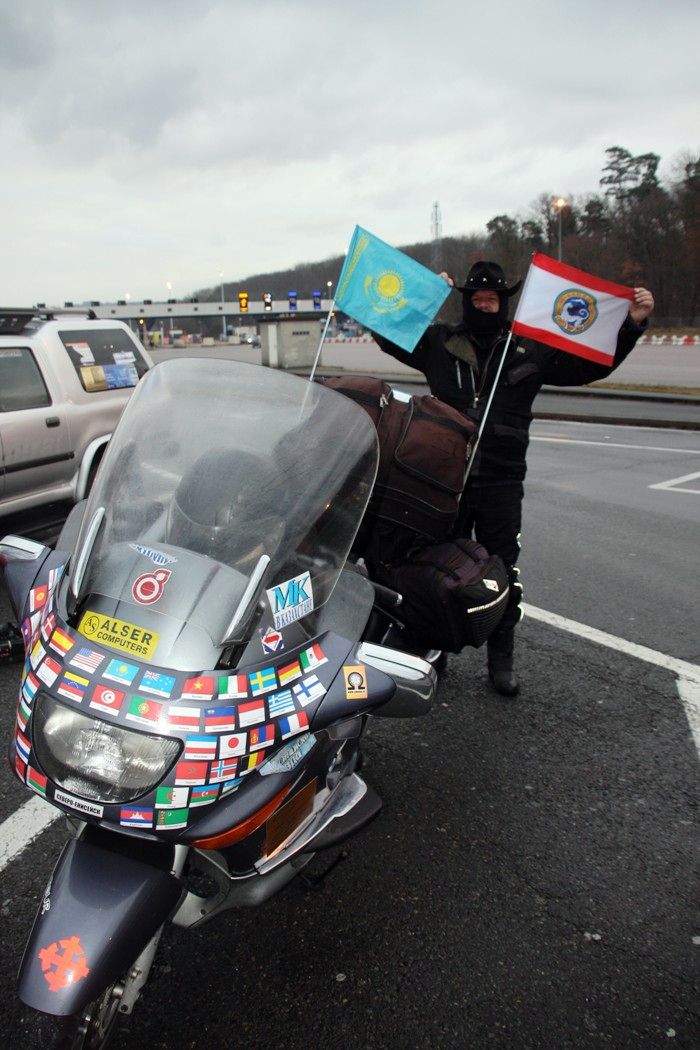