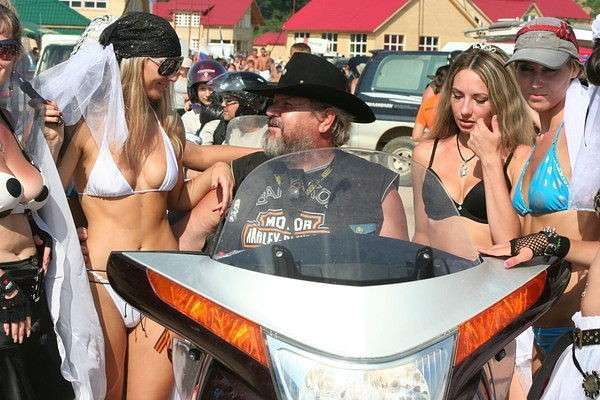 And here it is – Russian. This is my second visit to Vladivostok. Last year, as I was passing the third stage of my motorcycle rally in South and North America, I came here from San Francisco in November. Well, now I meets the President of the festival, my friend, biker and skater Igor Sokolov, people Sinus. This is the most legendary person in the biker movement of Russia. So, thanks to him, this famous festival “Face to the ocean”was born. It has already become traditional and is held for the fourth time. With Igor I was met by local bikers. Nice! As they say, from the ship to the ball. On the hour of the day appointed a press-conference of organizing Committee of the festival. Everything is very serious, almost all Russian TV channels, Newspapers and magazines are present… In General, spirits are high!

After a three-month “imprisonment” in countries where almost no Russian speech, Vladivostok seems like a Paradise. Yes, and I already feel like I went a little overboard with this ride – too long and time consuming it was… Well, come on, I wasn’t forced to do it, so there’s nothing to complain about. And while preparing to go to the city of Nakhodka, where for 3 days and will be held the 4th festival of bikers. In the same place I have a meeting with Fyodor Konyukhov, who is permanently residing in Nakhodka and, like me, who is a guest of the festival.

By the way, the guests of the festival. From the United States came biker Doug Wothke on a motorcycle “Indian chief” 1948 of release. We became friends quickly. We talked about South and North America. He went there all by himself. I was very glad that during my trip to America I passed 24 States and visited his homeland, Louisiana. Promised to get to Kazakhstan on my retro. Well, let him be haunted by luck! Also came the Belgian Christian Shawn, retromatic Ural (Russian-made!). On the way to Vladivostok happened to him an interesting case. Being on a bike show in Tomsk, he met a girl and asked her to marry. Said that the answer you get after the festival, on the way back. In General, the Finding were a lot of bikers and foreigners from the CIS countries.

A few words about the motorcycles that were present at the show. It is mainly Enduro and tourist. Virtually invisible elite or expensive sport bikes stunning “Harley”. But when I was at the bike show in Hollywood and in St. Petersburg (Olgino), there was light-headed from the newest motorcycles. One more beautiful than the other! However, ordinary bike-show, too, must have place under sun. After all, beauty and extreme inseparable.

During the opening ceremony of the 4th festival “Face to the ocean” there was a parade of flag bearers, and the flag of our country – Kazakhstan – sailed ahead. During the official opening ceremony I was entrusted to raise the flag of the festival. Oh, it was an unforgettable moment! Then the anthem of the festival, performed the mayor of Nakhodka, representatives of the parties “United Russia” LDPR and others. The press then wrote that it was the best of all 4 festivals. There were a lot of nominations, I recognized the “Biker of the year”. Three days on the ocean did not stop the music. Discos until morning, 24-hour swimming in the ocean, various competitions, volleyball… there were several famous rock bands. Even at the opening there was a well-known orchestra in Russia under the direction of Selivanov. In addition to the bikers, which had accumulated more than thousands, was attended by about 3 thousand guests. All lived in tents. Discipline was on the level. Many acquired itself friends and simply rested. In General, the holiday was a success!

Nakhodka festival is the only one in the world, and its popularity is growing every year. Another thing is that it’s hard to get, but this is his highlight! After all, if you’re a biker-trucker, then you do not need to cover such a distance. And I, in turn, have got a lot of interesting here and I think that, being the President of The Kazakhstan bike club, I will try to introduce at home all good from what I have seen here. We will also make a festival and invite friends-bikers and guests. All the more, that people this likes.

The time flew by. There was a natural closure. It is difficult to appreciate the significance of this event, but one thing is clear: it’s just a cool vacation not only for bikers, but also for guests and just vacationers. In short, it is a French Saint-Tropez on Russian soil. Thank you friend Sinus and his team! In the meantime, with some sadness, all say goodbye and promise each other new meetings on the Pacific coast.