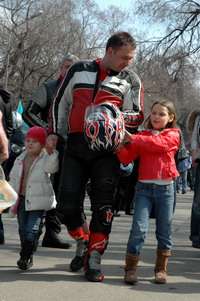 Gerych! That’s what we all called him. This is the man who said and did! How many times he had to resolve with the traffic police, in those days, when we bikers didn’t want to admit. Neither the public nor the Authorities. It will always remember the youth. Thanks to him, a test site for crossmen athletes appeared in Almaty. Every year there are new athletes who have received driving skills on this Moto stadium. He was one of the leaders of bike fest BALKHASH 2007. Thanks to him and his team the first Cup of motocross Festival named after the first festival took place. He spent a lot of time delivering motorcycles, accessories and spare parts for our country. Of course it is still a lot of things planned and wanted to do for the bike movement in Kazakhstan. But his life was tragically cut short. But he’s still with us and I thank him for everything. And we will all remember him as a PIONEER and Innovator of motoculture.

Members of the bike club