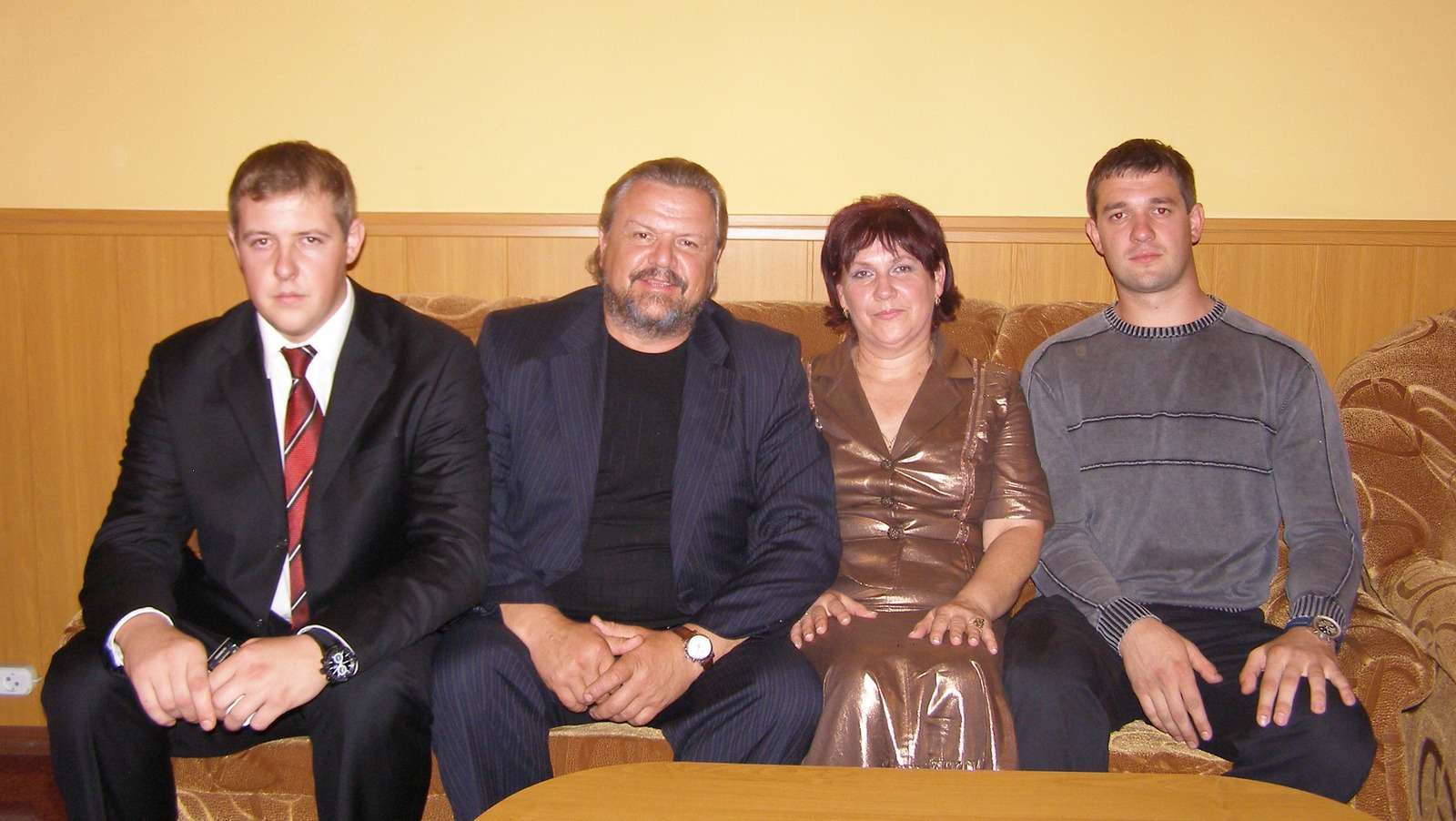 Mother Petrukhina (he) Alexandra – worked for more than 40 years in the mines as rocketcity stand gun.

In 1975 he received his secondary education and enrolled in photo school.

Like all boys Dmitri raved about travelling from early childhood. Constantly in his dreams he went through the world in a far country. His favorite writers was Jack London, Hg wells, Fenimore Cooper, Belyaev… Thanks to my older brother Igor he early managed to master the basics on driving post-war trophy-motorcycles. Yes, Yes, exactly. In postwar times it was not possible to buy bikes in shops, since they were in short supply. But before the army Dmitry managed to acquire on their money.. a legitimate (albeit old) motorcycle MINSK.

After serving in the Army, he followed in the footsteps of his parents and brother and settled in the mine. “Sokolska” as a stope miner.

In 1982 he studied in absentia. Graduated from the Karaganda mining College. In 10 years of work underground-I moved from the simple miner to the senior mechanic on service of mining combines. He has diplomas and encouragement for rational offers.

In 1991, almost all mines were closed and Dmitry and his family left Karaganda to Almaty. Dmitry together with his wife Natalia organized a travel Agency. He continued his studies. Graduated from the Academy of TOURISM and Sports with a degree in tourism Manager. Then master’s Degree in 2015.

Since 2000, here in the capital of modern and independent Kazakhstan and began the biker movement. Began to emerge for foreign motorcycles – they were imported along with beushnye car business – the deliverers of Europe. The borders are opened, and the dream of Dmitry became closer every day, every hour.

In 2004, he decided to start on a motorcycle around the world. It should be noted that the impetus for this start was the arrival in Kazakhstan in 2004, Evan McGregor – actor-Hollywood star ( Star wars. Moulin Rouge) with a friend of Charlie Borman on motorcycles . After their meeting, Dmitry already knew – that will fulfill his dream.

Hoisting the Flag of Kazakhstan for his motorcycle, it STARTED.

He was followed by his whole family, and close friends – Valikhan Kosumbaev, Mukhtar nurlybaev, Yerzhan Duisekeev, Eduard Smirnov, Alexander Emergency, Vladimir Dubrovin, Vitaliy Kim, Sergei Spitsyn from Almaty. Yerlan Turgumbayev from Petropavlovsk, Vasily Koval, nurik from Karaganda, Bulat Abilov from Astana and Bulat Akhmetzhanovich Koshumbaev together with his wife aunt Tamara from Kokchetav and of course his two sons Dima and Denis and his wife Natalia. It should be noted that Petrukhin’s family provided material and financial support to Dmitry , for realization of his DREAM, up to 2007.

As they say journalists and friends, the very disasters and anomalies that occurred at the place of his birth ( born in the place where the Tungus meteorite fell down) – influenced his future destiny. It is no secret that in the world of bikers no biker has ever managed to overcome all the continents and drive more than 150 countries – this is not the finish.. It is always on the road and the Mission to promote Kazakhstan CONTINUES!!!

The main advantage of Dmitry and his team is a CHARITY. Every year, several times a year, he and his associates visit orphanages and boarding schools on their iron horses. Regularly chew on veterans. Organize them gifts. Every year, events are held on the day of the Elderly. This has been going on for many years.

His Deputy activity is noted by voters of Almaty – as Excellent. Even being abroad, he does not ignore any question. His mobility is very high.

Now it became clear that his HOBBY to go around the world, has become a PROFESSION. Since that time he has become a true PATRIOT of his country and carries out a lot of international projects to promote Kazakhstan abroad!!!

In 2006, returning home from a single round-the-world motorcycle trip, he was summoned to AKORDA and personally President Nazarbayev N. And, thanked his and handed the order “DOSTYK.” During the meeting Dmitry told him that this was only the beginning and that he would continue to promote and make his Homeland recognizable.

From 2007 to 2011, on behalf of the mayor’s office of Almaty, he fulfilled a large-scale propaganda program aimed at further promotion of the Kazakh brand abroad.

As part of the promotion of the Asian Winter Games 2011 and the further development of the international image of the Republic of Kazakhstan, he organized abroad more than 200 fashion events for the country, press conferences for the heads of States visited, meetings with representatives of sports, science, education, culture and business. At his invitation, our country was visited by representatives of more than 45 States, members of the Olympic Council of Asia — “OSA”, athletes from 26 countries who arrived to participate in the Asian Winter Games-2011. This is a record of all of the winter ASIAN games in Astana. Thus, Dmitry I. Petrukhin made a significant contribution to strengthening the high status of the Republic of Kazakhstan among the international community.

In 2009 he was recognized as a laureate of the national award “Public recognition” in the Republic of Kazakhstan.

Since 2011-2012, with the support of the country’s leadership, Dmitry Ivanovich Petrukhin has implemented a fashion project for our country – a round-the-world regatta on the yacht “Shokan Ualikhanov”, which was marked by a new world record of Kazakhstani travelers. Unprecedented case. The question of entering into the Guinness book of Records is examined.

From 2012-2013 on behalf of the Government, Dmitry Ivanovich Petrukhin undertook a PR expedition to the Caribbean countries to promote the position and lobby the interests of Kazakhstan in time for voting for the right to host “EXPO-2017 Kazakhstan”. His team secured victory in the region (among 15 countries). This region voted for our country.

From 2013 to 2014, on behalf of the mayor’s office of Almaty, in preparation for the Universiade 2017, he implemented a PR expedition to Africa and Europe. He held many press conferences with the sports community, Ministers of sports and culture, the presidents of the national Olympic Committees of these countries, through the media called on the public of Europe and the African continent to take part in an important international sporting event and visit our country during The winter Universiade 2017. Currently, the expedition of Dmitry Petrukhin is continuing its work.

In 2015, on his initiative and with the support of the Kazakh public, a large-scale propaganda cultural and educational project was implemented – the Republican motor rally dedicated to the 550th anniversary of the Kazakh Khanate.

In 2016, Dmitry Ivanovich Petrukhin with a team of like – minded people made a propaganda motor rally in all regions of Kazakhstan with Patriotic actions-“25 years of Independence of the Republic of Kazakhstan” and “1000 years of ALMATY city”, as well as in support of Kazakhstani athletes at the Olympic games “Rio 2016”.

His personal expedition motorcycle BMW K1200LT, where Dmitry Ivanovich under the flag of the Republic of Kazakhstan crossed 5 continents and 150 countries for 10 years, donated to the Museum of the First President of Kazakhstan. Now it is a part of the history of Kazakhstan’s Independence.